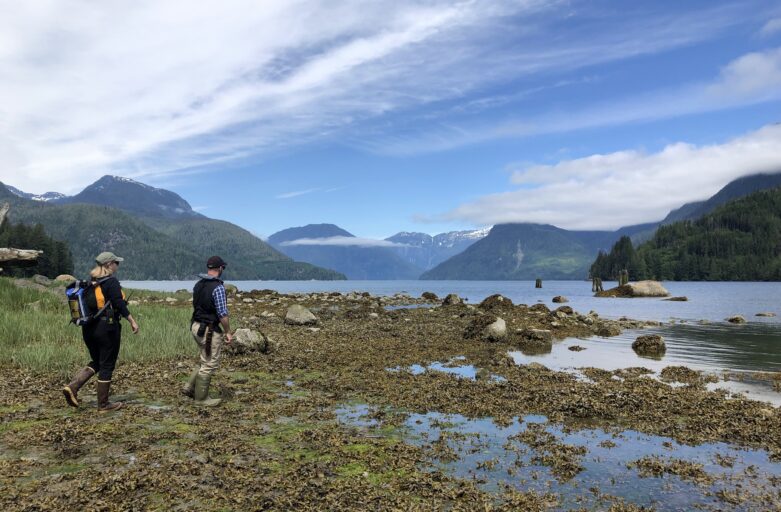 BearID in the field: part 2

It may only be July but the seasons are changing in the Great Bear Rainforest. With changing seasons comes different individuals coming into the study area, changes in behavior and movement patterns, and seasonal ecological processes beginning. July sees the return of the Pink salmon, the first fish to enter this river system on their final push to their spawning grounds and we were delighted to see a few big splashes in the Cove and some salmon swimming in the mouth of the river. For our two-week research shift in the field, we had a three main goals; check our 28 camera traps, bear observations in the estuary, and update locations to reflect seasons change. Each camera trap location that we use is chosen for either geographic or target features such as scent marking trees, highly used bear trails, or close to feeding sites. Some locations have been used for multiple years and others were established last season. After we checked each research camera, which ended deployment number two and began deployment three, we contemplated which cameras to move to follow bear movement as salmon begin to arrive in the watershed.

During this time, as the salmon run progresses through late summer and fall, we see known and unknown individuals coming into the area. Some choose to stay to feed or pass through and are only seen once or twice, but nevertheless we are always pleased to see a recognized individual. This shift, along with some Cove regulars (F002 Lenore, F001 Bella, F016 Flora), an adult male bear nicknamed M018 Das Auto was viewed in the estuary and captured on two of our research cameras. This individual is typically seen in this area in the springtime while he engages in breeding activity but was not observed here in the early season this year. We know he is an older bear based on size, body shape, behavior and viewing history, so not seeing him when expected was a cause for concern. It seems we moved the camera at the right time to catch him coming into this area and seemingly looking for fish.

Going forwards BearID can be used to assist in conducting behavioral studies including social behaviors. As we continue to collect facial images of individual bears we are also collecting data on movements and behaviors that could be attributed to unique characteristics or seasonal activities. For example, we observe male bears with unique scent marking strategies including body positions and time spent at a rub tree. Finding deeply stomped trails (a method of scent marking on the ground) indicates male presence in an area and through a combination of camera traps and the BearID software we can identify the individual to better inform data analysis.

We will be back at the field site in a few weeks’ time for camera maintenance and will report back on our findings.