The Salmon Have Arrived! 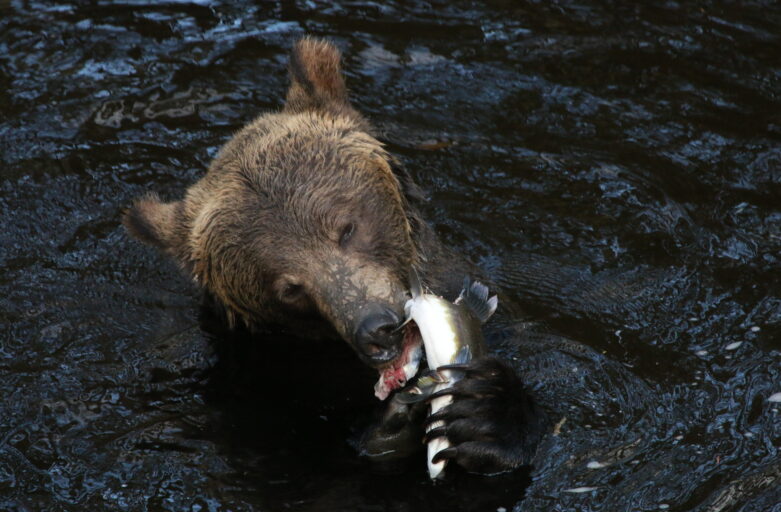 BearID in the Field: Part 3

Fall has arrived in our study area and with it comes salmon, colder temperatures and different individual bears moving into the area. For the past two weeks we have been collecting camera trap footage, making any needed adjustments, processing footage, and conducting bear observations. The change in seasons allows us different viewing opportunities and instead of predominantly boat-based observations in the estuary, we view bears up the river systems. The grizzly bears we study on the Pacific coast rely on salmon runs during hyperphagia (a time of extreme weight gain prior to winter denning) but with salmon returns in decline through the coast, bears must find other sources of fat and protein. As mentioned in our last blog post, pink salmon return to this watershed in July and begin to move up to their spawning grounds in August and September. This year we (and the bears!) have been delighted to see salmon returning to this river on mass and based on counts and observations, we are experiencing the best return since 2016! On first visiting a viewing platform this shift we were struck by the overwhelming smell of salmon and salmon-containing bear scat, a smell our lead ecologist hasn’t smelt here in many years. This return would not have been possible without the stewardship of the Da’naxda’xw Awaetlala Nation, Nanwakolas Council and Knight Inlet Lodge and their commitment to salmon enhancement in this watershed.

The arrival of the salmon has attracted returning bears and some new faces we have not yet identified, which has made for exciting bear viewing and has significantly increased the time required to identify individuals on the camera traps. This is great for collecting facial images of individual bears, identified or not, and has increased the number of detections on some of our cameras, notably the ones on major routes. Not only have we seen different individual bears moving in and out of the area, but we are also seeing a great return of family groups. We have documented eight different female bears with cubs, higher than the past three years! Only two of whom were seen here last year.

The end of the field season is rapidly approaching so our team is working hard to finish any remaining tasks on the ground and fit in as much time as possible photographing individual faces and working through the collected camera trap footage. The increased number of detections means more time spent processing data, so we get our laptops out wherever we can (bug net not always required)!

We are looking forward to returning in a few weeks when the salmon being to spawn and complete their life cycle; collecting what will be our last camera trap deployment of the 2022 field season.